Fought At The Gallery Maze: The Passageways
105 days 15 hours 24 minutes ago

Rumble In The Tunnels

Elif took a deep drag from her electronic cigarette as she attempted to calm herself. The Scottish raid on the spaceport had taken it’s toll on the company, and now things were going from bad to worse. They were staring down the dark tunnels of the asteroid’s bowels, better known as The Galley Maze. She had no idea what lay ahead.
“You know that crap makes you older, right?” another Odalesque smirked, loading a clip into her spitfire.
“Yeah, shut up, Azra,” Elif shot back “life’s too short anyway.”
Azra nodded nervously.
“Allah as my witness, increasingly so.”
Out of a alleyway a slim figure appeared flanked by two Janissaries in imposing power armour.
It was Leila Sharif, famed Husan technical operative, here to assist them on their mission.
“You ready, ladies?” Leila asked calmly.
The two Odalesques stayed quiet.
“Is there a problem?” Leila looked at the two disapprovingly.
“No, Madam Sharif it’s just…….,” Elif paused.
“What is it, mistress?”
Elif sighed.
“Madam, what are we doing here? The Sword Of Allah has no presence here. And frankly this place looks like…..”
She paused.
“…..catacombs. It looks like catacombs.”
Leila nodded.
“I don’t like this place either,” Leila tried to piece her eyes down the tunnels, “but after that raid we’re short of supplies. The spaceport must be held and we can’t do that without food to eat and bullets to fire.”
Elif nodded.
“We don’t know what’s out there,” Leila continued, “we are certain there are stockpiles hidden down here, criminal gangs, not sure of other factions.”
Azra grinned a menacing smile.
“Criminals, huh? This should be fun.”
Leila glared at Azra.
“We know nothing of this area, Odalisque. Assume nothing.”
The group lay silent for a moment before a comm call came in.
Leila nodded.
“Djanbazan fire team is in position. Men and women of the gates, let’s go.”
She turned back to the squad.
“And for Allah’s sake, keep your eyes open. This is the perfect place for an ambush.”

Turn 1- Haqqlisam (Qapu Khaqi)
QK scouts and snipers spot the enemy lying in wait. Not mere criminals but quite the opposite. A division of O-12 perfectly positioned to ambush anyone trying to venture further down the tunnels.
A Yuan Yuan mercenary is called in to provide smoke to cover an advance but there is a mishap in the confined space and she drops far back from here intended location.
Never the less the Djanbazan sniper tries to identify and eliminate targets lying in wait, killing two before spotting an O-12 sniper ready to rise from his hiding place and make life difficult for Operative Leila’s squad.
A Shihab remote is brought up to assist the Djanbazan fire squad to pin the threat down.
Leila’s squad move into an alleyway to search for supply dumps.
The good news, a pile of explosives lies in from of them, with enough explosives and ammo to keep the besieged QK forces fighting for at least another week.
But coming round the corner they spot the bad news, a O-12 bot is waiting guard.
Azra takes it out with her spitfire but is glued to the ground, helpless.
Elif takes position on the corner to cover her friend.

Turn 1- O-12
Pinned but very much ready, the O-12 spring their trap to stop the Haqqislam interloppers venturing further into The Galley Maze.
A Dakini Tacbot with an HMG pops out from behind a corner to take aim at the Djanbazans holding the defenders down.
With hacker assisted accuracy it blows away QK’s covering sniper and shock marksman now leaving Leila’s squad cut off from cover.
With the threat lifted the O-12 sniper stands up and shots at Elif, taking her down before the doctor can come to her aid.
Azra watches helplessly as the rifle now turns on her.
On the opposite flank a Delta Unit trooper drops down from the cavern ceiling to try and catch the Yuan Yuan unaware, but the spritely mercenary dodges and takes down her would be assassin.
Miranda Ashcroft moves up to capitalize on the successful ambush but knows the “Men Of The Gate” should never be underestimated when cornered. She attempts to throw a smoke grenade to cover her advance but is unable to get a clear throw from the Yuan Yuan’s pistol fire.

“Ambush, O-12 hold the area! Requesting instructions! Four down!” Leila Sharif yelled into her comm.
“Operative, continue with your mission,” the radio calmly replied, oblivious to the panic she and her troops were feeling, “capture supplies and disrupt enemy communications if possible.”
“Copy!” Leila shut off her comm, “Allah damn them, ‘if possible’! We’ll be lucky to get out of her alive!”
A Jannisary turned to her, swinging her missile launcher and loading a round.
“Madam, you go for the supplies. We’ll cover you.”
Leila nodded and curled her lip.
“We are men and women of the gates! We will hold! We will achieve our objective! The Sword of Allah is counting on us!”
The two Jannisaries nodded.
The comm cracked to life. It was the Al Hawwa forward observer.
“What now!” Leila barked.
“Gamma Unit! Closing on your position!”
“Shit!” Leila cursed “Hold on people! Just keep them off me.”
She taps her comm again.
“Yuan Yuan!”
“Wazzup.” Leila frowned. Cursed pirates. But so far she had done her job.
“Hold your flank at all costs!”
“Yo, got it.”

Turn 2 – Haqqislam (Qapu Khaqi)
Yuan Yuan moves up to a corner on a flank in am attempt to hold off Miranda Ashcroft and a Varagian Guard.
The Shihab remote moves up again with assisted fire and blows away the Dakini Tacbot. It then moves to attempt to deal with the Kappa unit which is now the biggest threat to Leila.
After a short exchange the Shihab is destroyed by the Gamma Unit’s superior firepower.
Leila moves up, sensing another hacker and overloads his mind with Skullbuster, knocking out any cyber threat to her supporting Jannisaries.
Knowing the Gamma unit is going to come for them, she and her squad take up defensive positions, only metres from the supplies so many have already lost their lives to obtain.
The Jannisary attacks the Gamma Unit down a tunnel and after a short firefight with no wounds taken on either side, the Gamma chooses to retreat rather than test his luck.

Turn 2 – O-12
Miranda Ashcroft again tries to come down the flank but the Yuan Yuan continues to make life difficult for her. Eventually she gets a hit in with her boarding shotgun and the pirate finally goes down.
Hidden, the Al Hawwa jumps out of camouflage to try and get a forward observation of the notorious bounty hunter but fails and is killed.

“Right flank has collapsed, Right flank has……..”
The comm fell silent as the Al Hawwa scout was taken out by Miranda.
Leila looked around the few left.
“We’ve lost,” she said, “but we’re not leaving empty handed. We’re getting those supplies!”
The others nodded.
“All unit’s cover our retreat! See you back at base! And if not……in the next life! Allah is great!”
This was it. Now or never.

Turn 3 – Haqqislam (Qapu Khaqi)
Leila readies herself to move as a Jannisary fires her missile launcher at the enemy sniper, knocking him unconscious and clearing a path for Leila to get to the supplies.
Leila leaps froward, secures the supplies (as well as an extra +2 armour) and falls back to cover, ready for the Gamma to try and take them on again.
A Nomad Hacker and hidden Hafza move to cover the Haqqislam antenna and their inevitable retreat.

Turn 3 – O-12
The Gamma Unit decides not to try his luck against Leila and her squad, now with three ARO’s facing his way.
Instead Miranda secures the supplies on the opposite flank, picking up D-charges and begins moving towards the QK antenna.
The Hafza tries to cut her off but is taken out by a long range shotgun shell.
Miranda reaches the antenna but is only able do one damage.
Leila and her squad are left to secure HVT.

Leila, still breathing heavy, checked her back as the four remaining troops and one prisoner headed back to base. Of course she made her prisoner carry the costly supplies she just captured.

Cruel? Maybe. But she certainly wasn’t in the mood to be charitable.

“How did we miss O-12? I didn’t even know they were on this rock!” one of the Jannisaries cursed.
“We’ll find out soon enough……” Leila replied shooting a glance at the poor O-12 clerk weighed down by munitions.

Her comm cracked.
“Operative Sharif, report!”
Leila’s screwed up her face before replying.
“Supplies secured, heavy casualties. Suggest flagging The Galley Maze as enemy controlled territory. O-12. Possibly ALEPH.”
“Roger that. Good hunting. Our people will be happy with your wares.”
Leila clenched her teeth and a tear ran down her cheek.
“They’d better be.” 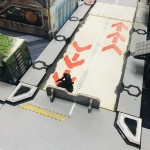 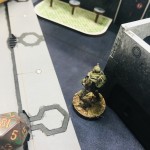 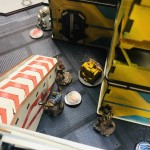 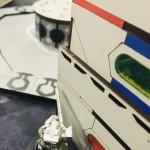 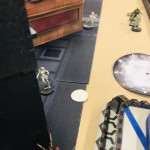 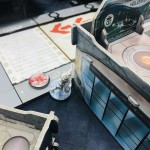 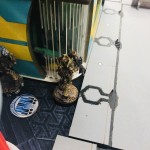 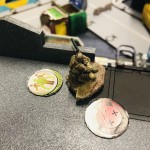 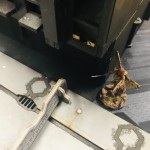 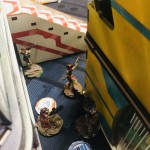 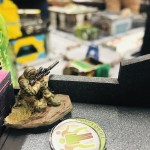 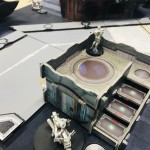 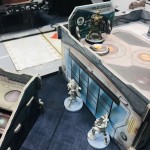 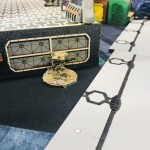 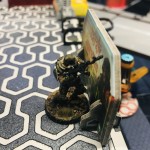 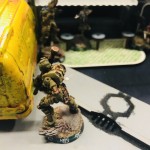 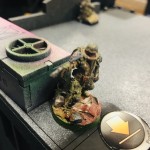