The mission started so smoothly. Tarik and his team had infiltrated the area without notice and left the remotes at the perimeter. They were following the signal of the tracking device installed on the container they left as a bait at one of the Shasvastii nests they have raided earlier. It came as no surprise that it lead them to Liberty Cargo’s storage facility, they knew that PanO way trying to hide something ever since they arrived on this Allah forsaken rock.

Then in the blink of an eye all hell broke loose. The EVO operators already warned the Amir that they were picking up signals indicating that forces from the Jade Empire were also present, so they were progressing as cautiously as they could with the Hortlak Janissaries leading the way with him, his Doc Leila and a Monstrucker in tow. When they caught site of the container they were here to retrieve it was in the hands of a Fusilier who was seemingly waiting for a transport remote to pick it up, but his sniper signaled that he saw movement across of the hall so they hunkered down behind cover.

Out of nowhere a wretched Ninja appeared next to the Fusilier, who was so surprised that he dropped his cargo. The container buckled as it hit the floor and the lid came off releasing agent P0402 (this was the designation given to the unknown alien substance inside by the hazmat team that initially investigated it) into the atmosphere of the logistics center. The alarm went off as both the Ninja and the Fusilier fell to the ground convulsing and gasping for air. All of sudden another Fusilier (seemingly and Indigo judging by her composure) appeared and dragged his comrade onto the arriving transport rem while cursing the Angus beef from old Earth from some strange reason.

On the other side of the facility they saw other Yu Jing soldiers falling out from behind cover as they succumbed to the infection, while others could be seen converging to the center. The Hortlaks and the Khawarij doc were completely unphased. Tarik turned to Leila and the Monstrucker: – Hold your breath!

They had to get out before the whole security detail was upon them, but now not only the security rems were blocking their way out but also those damn Yu Jing morons. Tarik ordered the operators to bring the escorting remotes up to block them while they made good their escape. He took up position on the right with the three Janissaries and Leila covered by two Fanus’ and a Rafiq armed with a Redfury, while the doc and the Monstrucker took cover on the left next to the EVO repeater with another Fanus and the Shihab. The doc’s helper bot was tasked with following Leila and the ones controlled by the engineer were assigned to the Rafiq and the Shihab. Luckily both the Husam and the Mostrucker were able to hold their berths.

The Rafiq moved up the flank and its Redfury made short work of the two security remotes guarding the gate to the right, so Tarik’s team started moving forward. The Hortlak sniper caught glimpse of a trooper on a gentry on the other side of storage facility and fired but failed to take him down. The Ju Ying soldier fired his missile launcher and hit the Janissary wounding him, and the blast also threw Tarik against the wall knocking him unconscious. The doc activated his helper bot and moved it to assist the Amir pumping stimulants into his veins, then stitched up the wounded sniper. Seeing the number of soldiers moving up against them they decided to move back behind cover near their starting position, while the EVO operators turned the remotes into overdrive to offer better distraction while the Amir hatched a new plan.

Taking advantage of the situation a Lu Duan moved up and damaged a Fanous, then a Dakini started moving down the right flank engaging the Rafiq and destroying it outright. Lucky Alpeh supports all human factions the same way… Then it proceeded to hack the nearby gates control panel and after some fiddling managed to open it and left the facility, followed by Pangguling.

Tarik came up with the new plan:
Cover me! – he yelled and launched himself forward.
The Hortlak sniper traded shots with the Yu Jing trooper on the gentry again this time forcing him to take cover. Tarik moved up and destroyed the Lu Duan and another Yu Jing remote.

Meanwhile a TR bot aided by the EVO operators shot at the Shihab on the left flank disabling it, and the Yu Jing troops started moving towards the gate, while a Rui Shi damaged another Fanous, even though it survived numerous shots from the missile trooper previously.

The Monstrucker was finally out of breath and succumbed to the infection. Lucky for him the Khawarij Doc was there to give him immediate aid, saving him from a grisly death. Tarik blasted apart a Yu Jing TR bot covering the gate and ordered his team to leave immediately. He on the other hand stayed a bit longer, as he was hell bent on taking revenge on the trooper who injured him with his missile launcher, so he moved closer, took aim and killed the bastard. Seeing he has no chance of aiding the Mostrucker and his Doc he ordered them to leave as soon as they can and followed Leila and the Hortlaks.

The Monstrucker attempted to repair the Shihab with his helper bot, and although it first seemed he will succeed in the end he botched it spectacularly and completely destroyed it, so he took up position near the gate to try to slow down the fleeing Yu Jing troops, but wasn’t able to hold them for too long, and they fled through the gate.

Well at least the ones who were still able to do so, good a number of them were still suffocating on the floor as the security troops arrived, so the Doc decided to peel away the way they came in, dragging the injured Monstrucker with him. The only evidence left that the Swords of Allah was ever here were a few smoking remotes. But then again, those could be anyones… 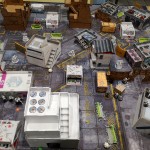 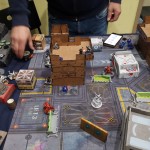