PanOceanian assault in to Haqqislam territory!

Normally I try to take a lot of effort with my reports, going into the span of hours. However, I began writing this report currently at 0130 AST, on 15 Oct 19. I'm going to try to be as detailed as I can, but my apologies as I'm trying to make it in before the cut off.

"Commander Husker, this has been a long time coming..." Commander Berithh said to himself aloud.

Since the original assault on Liberty Cargo by the Haqqislam forces lead by Husker, PanOceanian forces have pursued his forces throughout Novyy Bangkok. How, finally pursuing him to NBIS, Berithh would have his revenge...

Before the game, we had agreed through text messaging that we would play Countermeasures, so we could prepare appropriate lists. We also agreed to play with extreme classifieds. Upon arriving at our gaming location, we had a roll off to determine where we would play, and I had won.

Because I have a less than stellar win record versus Husker, I decided that I wouldn't give Haqq the opportunity to attack Liberty Cargo, so I decided the game would take place in Haqq territory. Plus, that fits the narrative I've been going with over the past couple of games, where I've been chasing his forces since his original victory against me at Liberty Cargo. 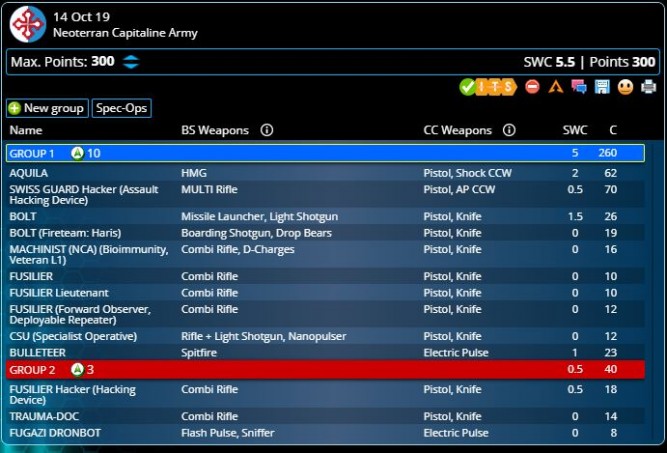 This is the list which I had decided to go for, with the Bolt Haris including Engineer, and a 4 man link including the fusiliers and the CSU 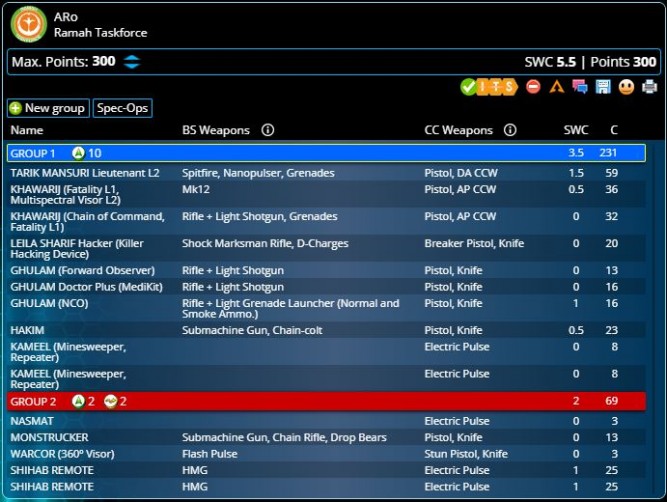 The table layout after deployment. PanO deployment zone is Blue, Haqq is beige

At the start of the PanOceanian turn, using all but two orders in pool one, the Swiss Guard moves all the way to the right flank of the board, within Zone of Control of an enemy HVT. After two attempts, he successfully completes HVT-Espionage.

From group two, the Fusilier hacker puts Assisted Fire on the Bulleteer.

Finally, the Hacker in group two decides to use the two remaining orders in group two by idling 4 times consecutively.

The Swiss Guard Assault Hacker (Blue Square) moves to the other side of the board, before revealing within ZoC of an enemy HVT (Beige square)

End of PanO Turn 1. The Bulleteer has moved forward and entered suppresive fire, while the Aquila on the right flank uses his Data tracker order and does the same.

The Haqqislam turn begins with a TR bot opening fire on the Bolt haris, specifically targetting the Missile Launcher Bolt. Though the first time it is able to land a hit on the Bolt, the bolt passes his armour save. Firing again, the bolt actually manages to land a hit with his missile launcher, which obliterates the TR bot.

((TL;DR for the next part: His link massacres my left flank, while I lament having my Aquila on the right flank.))

Husker then actives his Khawarij/Ghulam link, comprised of Tarik, a MSV2 Mk12 Khawarij, Lela Sharif, a Ghulam NCO, and Ghulam Doctor. The link moves down the left side of the board (Relative to PanOceanian battle lines), and throws smoke. The MSV2 Khawarij shoots through the smoke, killing the Missile Launcher Bolt. The link advances further, again shooting through the smoke, killing the Bulleteer. Finally, the MSV2 attempts to fire through the smoke at the Fugazi, though the Fugazi is able to actually stun the Khawarij. Taking charge of the situation, Tarik assumes control of the link, brusting forth from the smoke and utterly destroying the Fugazi. The link than moves further down the board, targeting in turn; the remaining Bolt, killing her ((Who, when needing a 19 to hit Tarik, successfully rolls a natural 20)), the engineer, knocking him unconscious, the trauma doc, knocking her unconscious, and the fusilier hacker, killing him.

Bolt Missile Launcher, accomplishing the only victory for PanOceanian in the bottom of turn 1, kills a TR Bot. 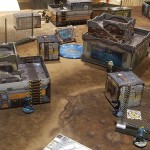 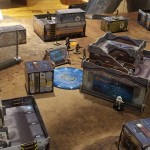 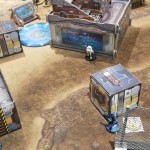 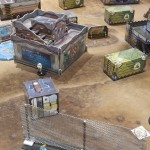 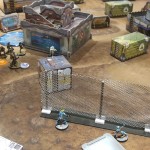 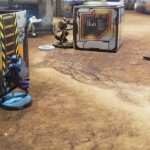 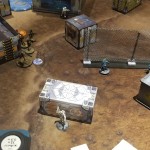 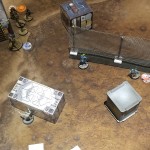 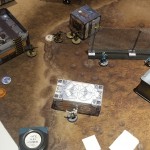 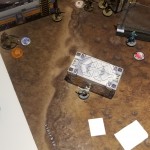 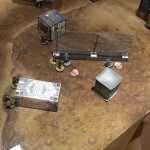 The Swiss Guard assault hacker moves forward into the enemy deployment zone, and is able to complete the classified Mapping, though it takes all of the orders available in the PanOceanian pool, having been depleted from the previous Haqq assault.

Fearing for his life in the current position he was in, the Fusilier LT breaks from the link team to try moving to a more secure location, using his LT order. A command token is then spent to reform the link team.

Not wanting to be completely flanked and out of orders, the Fusilier LT breaks formation with his LT order and falls back. The a command token is spent reforming the link, using the prone fusilier atop the building to act as the link leader.

The forces under Husker's command begin to attempt to regain their standing with classified objectives. Leila Sharif plants two D charges on buildings within the PanOceanian deployment zone, before the Monstrucker Engineer in group two his irregular and another order to detonate them, completing the classified Sabotage.

Next, the MSV2 Khawarij moves to take aim at a PanOceanian HVT, and completes the objective HVT-Identity Check.

Husker then orders his forces over to the the back line of the PanOceanian forces. He ends up eliminating the remaining Fusiliers and CSU, leaving the two units left on the board for PanOceania as the two NCA Guards.

A Hakim deploys behind the Aquila, and enters suppresive fire.

Leila Sharif plants D-Charges on two PanOceanian structures, which are detonated by an allied Monstrucker, completing Sabotage. Additionally, the MSV2 Khawarij takes aim of an HVT out of picture, and completes HVT-Identity Check.

Husker's link team begins its advance on the remaining PanOceanian forces. Despite having a great shot lined up for her Light Shotgun, the CSU misses, and eats a shot in return.

The aftermath. Though he was able to turn due to a Warning!, the Aquila was unable to see through the allied Fusiliers until it was to late.

In loss of Lieutenant, and a tied game, the two Guards, the Aquila and Swiss, attempt to make the most of the situation. Using two command tokens to convert their orders to regular, the Swiss attempts to complete the Telemetry on the enemy Monstrucker. Unfortunately, because of the Extreme nature of the classifieds being played, Telemetry requires two successful spotlights, and the Swiss fails his first attempt.

With one order remaining, ontop of the Aquila's Datatracker special order, the Aquila decides to charge forward and attempt to engage Tarik with his HMG, hoping to put the enemy in to Loss of Lieutenant. Unware that there is a Chain of Command Khawarij on the other side of the board, the action was to try to order starve the Haqq forces so they could not complete any more objectives.

The Aquila unfortunately falls before the weight of fire of Tarik and the suppressing Hakim.

The Swiss Guard attempts to Spotlight a Monstrucker (Hidden from Camera point of view), but fails. Since Telemetry in Extreme mode requires two successes, and with only two orders, the Swiss cannot complete Telemetry.

The Aquila, attempting to go out in blaze of glory, fires at Tarik, but is overwhelmed.

The remaining TR bot moves forward, and attempts to eliminate the Swiss Guard. However, due to his TO Camo and superior BS, the Aquila is able to kill the TR bot with a Double Action Round.

Tarik then moves forward, breaking from his link team, picks up a PanOceanian HVT, and quickly moves to his side of the board, ready to complete HVT-Kidnapping at the end of the turn.

In a last act of ill will towards the PanOceanian aggressors, the remaining four members of the Ghulam/Khawarij link team moved forward, where the MK12 MSV2 Khawarij engaged with the Swiss Guard, killing him.

The Swiss Guard defends himself from the oncoming fire of a TR Bot, rendering the REM unconscious.

Tarik moves to his side of the board, to complete HVT-Kidnapping, while the Khawarij MSV2 kills the Swiss Guard.

"Damn it!" exclaimed Commander Berithh, as reports from the front line began to come in.

As he moves to his desk to gather more troops for another assault, unwilling to give up his grudge towards Husker, an incoming message suddenly came over his vox.

"Attention! All PanOceanian Commanders! A cease fire has been called on Novyy Bangkok! Withdraw your forces to Liberty Cargo, and await debriefing."

"Hmmm. Until next time, Husker."

Well, that was a tough game. At the start I was feeling good, able to get an objective on the first turn. But from there, boy, did I lament not having my Aquila on the other flank, or even in the center.

This was a great campaign, and I really enjoyed it.

My apologies in the quality of report, it is currently 0328 local time, and as I said previously, really had to get this report in before the cut off.