Battle for the spaceport

This is my third competitive game.
Player 1 – Me (Bender)
Player 2 – Slow Walk

Player 2 won the right of the first move. He has a well-balanced army.
I gathered an army of breakthrough. The main task of which is domination due to the power of weapons. Very few specialists.

1)
Turn Player 2.
– I very stupidly put T-Drone. Player – 2 On the first turn, he destroyed my T-Drone with SQUALO fire.
– Landed Echo Bravo and killed MAAKREP. The first shootout ended in a draw. But during the second order he killed my Maakrep
– Link with KAMAU MULTI Sniper Rifle was shooting with my Q-Drone. My drone hit two critical hits on the first ARO !!! And killed KAMAU MULTI Sniper Rifle. Next, Player-2 rebuilt the link, placing KAMAU with HMG as the leader. And again, my drone lands a critical hit! Link fell apart. KAMAU with HMG unconscious.
– Player-2 SQUALO failed and he began to shoot with Q-Drone. My drone inflicted two wounds !!! Then fell into unconscious.
– Player 2 activated Echo Bravo twice and finished off my Q-Drone. Eternal memory of a great droid
This completes the turn of player 2.

Turn Player 1.
– I brought Avatar into SQUALO’s visibility range and started a shootout. Behind me stood Echo Bravo. Having spent 3 orders I killed SQUALO and Echo Bravo. They did two Avatar damage.
– I let the slave down and he restored one structure to Avatar.

2)
Turn Player 2
– Cured KAMAU with HMG
– Player two rebuilt Link Core. Brought out ZULU-COBRA. The shootout began with Avatar. As a result, Avatar was again injured. ZULU-COBRA died.
– FUSILIER tried to shoot with Avatar, but two models died.
This completes the turn of player 2.
Turn Player 1.
– Avatar Destroyed FUSILIER in sight.
– Having entered the enemy’s location, Avatar destroyed another FUSILIER. But FUSILIER on ARO inflicted a critical wound and Avatar died.
– Doctor died while driving, they killed him at ARO.
3)
Turn Player 2
– There are three models left. He could not do anything.
Turn Player 1.
– Moved forward with all the troops, took points and won the missions. 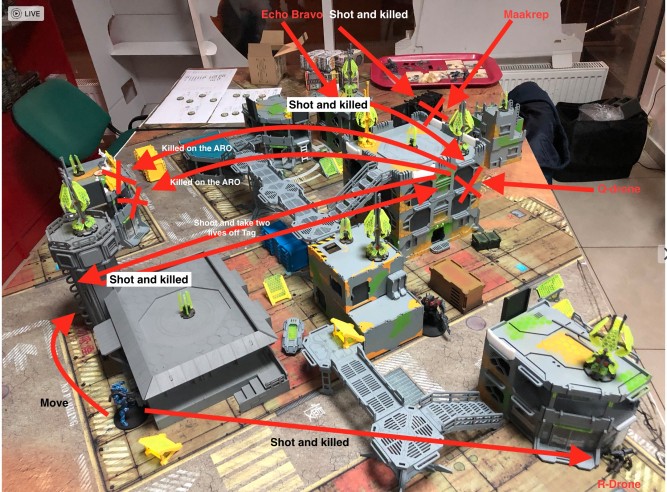