Fought At The Gallery Maze: The Chimneys
113 days 8 hours 19 minutes ago

Surprise in the chimneys

Initial reports indicated that the chimneys were infiltrated by the enemy, so Central has increased the patrols there both in frequency and in quality. To be able to eliminate any threat one may found there lot of these contained elite troops, and because he chimneys may be hard to navigate, these often contained only limited number of them.
This was exactly the case with Lt. Monika’s squad. They had at least a little from every advanced weaponry in it, and that’s why it had an Omega HMG, a Gamma Feuerbach, as well as Beta, and Delta too. As they traversed one of the tunnels in the asteroid, they approached one of the many grid nodes planted in there. The quiet striding of the squad was broken by the forward observer Delta sent out.
“I detected movement ahead. They are trying to be stealthy, and I can’t yet determine the nature of them. Do we have information about any maintenance work today?”
“No. Fall back, let’s try and take a closer look. Be ready, if the reports are true we may need our weapons!” ordered the Lt.
As they approached it became clear that the intruders were not an EI detachment as they thought but a Haqquislamite group doing unknown work on the antennas in the grid. As the little squad assessed the situation they realized they were already noticed. Two shady figures approached them, seen clearly by the Epsilon’s visor. After engulfed by the Varangine’s smoke the Epsilon discovered one of them as a mine, and removed it. The other one (approaching on a a higher level) was clearly a humanoid, so the little group fired a couple of warning shots into the air.
As it seemed that the intruders are not leaving Monika ordered the Beta trooper Datatracker to engage with the enemy. As he lunged forward the ominous camouflaged trooper released a shell from his panzerfaust, but the Beta shrugged off most of the damage. Afraid that she may loose the Beta chassis, Monika gave the order to remove the enemy. After he was dealt with the Beta engaged 3 enemies from which one was designated as the specialist working on the antennas. The Beta shot him but it’s remote controlled body was jammed and powered down.
The enemy did not back down. Tarik (he seems to be everywhere, is it possible he has more than one body?) jumped off from above to get closer but the vigilant Epsilon shot him unconscious. Restless, the Haqquislaimte raiders tried everything they had to knock out the sniper, but did not succeed and lost men while trying.
With the help of arriving Delta, the Sirius forward observer designated most of the antennas. The security protocol dictates that in case of a breach the antennas should be designated and destroyed to prevent further data leak, so the Feuerbach and Monika’s antimateriel close combat weapon got to work.
The Haqquislam forces tried to designate what antennas they could, finnally killed the sniper and than retreated back to the darkness. Monika’s group did not have orders to pursue so they instead recovered the Betas immobilized body and revived the unconscious Epsilon and waited for the cleanup squad. 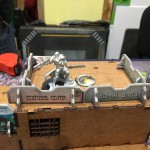 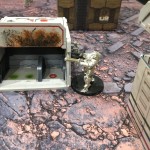 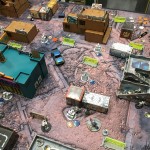 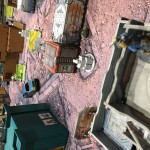 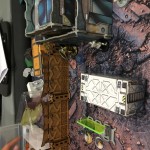 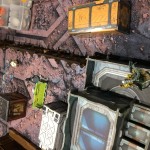 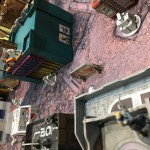 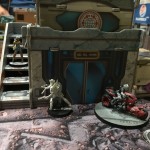 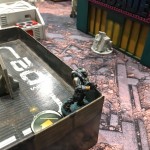