My apologies for the screenshots from TableTop Simulator. Unfortunately, the friend we’ve been playing it with is located in another city and he couldn’t come over with his miniatures. I hope that the narrative of this battle report is going to outweigh its videogamy origin.

IF YOU ARE READING THIS MESSAGE IT MEANS THAT THE SENTOV SPECIAL UNIT WAS ELIMINATED AND SULTANATE’S SUSPICIONS ON SHASVASTII INFILTRATING HIGH OFFICER RANKS IS MORE LIKELY TO BE TRUE ######________ TRANSMITTING COORDINATES OF THE UNIT’S LAST KNOWN LOCATION AND INTEL ON POSSIBLE ENEMY FORCES ######________ THE MOST PROBABLE COURSE OF ACTION OF THE ASSUMED SHASVASTII-AFFILIATED CELL ######________ XARAKS BATTERY AMMO AND SUPPLIES ######________ ORDERS ARE TO COLLECT INTEL IN THE REGION AND SECURE THE AO
-6 LOG.
///////////

“How’s our guest? What’s he doing?”
Broel pressed the comlink to his ear, eyes fixed at the gunslinger.
“The usual.”
Bill was trying to use his charm on his fellow kaplan CPO. Kira barely noticed aristeian’s attempts, musingly hugging spitfire like a mother holding her baby.
“How long until the scan is complete?” – Broel knew that Enver wouldn’t tell the exact ETA, but they and that “snake charmer” fella were the only ones with enough clearance to know what their real mission was. Funda’s team thought they were on patrolling duty, escorting Wild Bill on his little hike.
“Hold on. I’ve got something.” – Enver gestured to switch the comm frequency. – “K1LLY, you’re not making it easy on me when I’ll have to explain to Funda what an Al Hawwa’s doing-”
“Shut up and get your men ready,” – a heavily distorted voice cut in. – “Perimeter scan shows a two-TAG team heading our way. All Tohaa. One of them has a merc ID-signature.”
“An Anaconda?”
“Doesn’t matter, two lightweight TAGs are bad enough.” – A brief pause. Broel felt his head sweating under the helmet. – “We dig in and hold this position. I need you on the left flank to cover the consoles while I’ll deal with the right ones. Leila?”
“I’m all ears.” – Sometimes, Broel found it creepy how she never spoke unless spoken to.
“Cover my position. Broel, if they pull the TAGs closer to our position, fry the bastards.”
A second later Funda was already barking orders – an odd combination with her odalisque looks. The ghulams quickly positioned themselves on the roof: most of them prone, with only Aycu and Ayten poking their heads out, training sniper rifles where the rattling of mechanized chassis was coming from.
“Wait,” – Kira said. – “I recognize it. You hear that loose joint?”
She looked at Broel. Even through the helmet, he could see the concerned look on her face.
“I thought he died back then.”
“Yeah, well, what you think that cube jaeger was for?”
“Shit…” 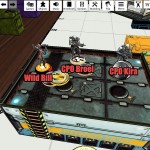 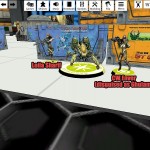 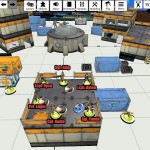 The first one to show up was a beefy Gorgos, coming towards Aycu and Edip guns blazing. The hail of bullets covered the rooftop like an iron curtain.
"Got him! It's bleeding." – Aycu yelled, almost enthusiastic if not for the fact she's in for a showdown against a TAG.
Shots fired again: Gorgos came around the left flank, spraying a fanous with bullets. The AP rounds tore through the remote like paper. Broel heard Aycu and Ayten on the comms.
"Damn it, where is he?"
"Behind the dome, over there."
Another barrage tears the bulkhead to shreds, with Aycu disappearing in a gust of red mist.
He could hear heavy breathing on the comms. A couple more shots ripped through the air. Ayten fired in response.
"Sniper, on our 10, think he's not a-"
"Allah preserve us!" – someone else's cries got devoured by another shot.
Broel heard Funda switching to distress frequencies. He couldn't blame her. There were plenty of corsairs who had worked with QK at some point: a distress beacon could mean a big fat paycheck, provided they last long enough to make a transaction.
Blam, blam, blam. Funda's bio-signs flatlined, turning red. Edip quickly took over.
"Got a visual of Rasail team, moving to the right flank terminal." – Judging by the shots, he was running and gunning.
"Can't move." – K1LLY uttered. – "They're pinning me down. They got a krakot closing in on my position too." 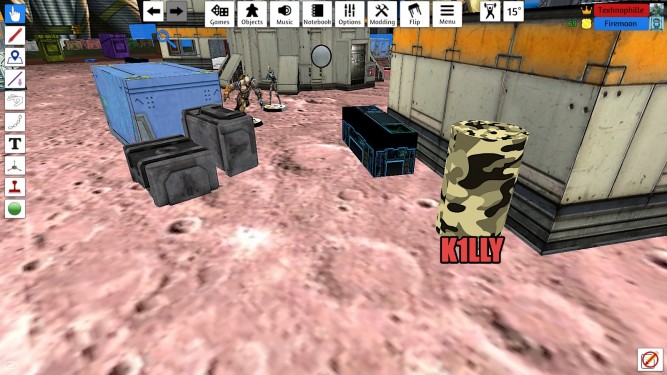 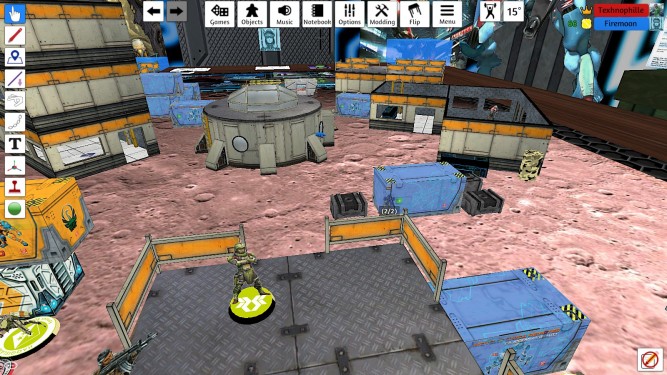 Gao-Rael wipes out half of the fireteam after the Gorgos killed one of the snipers!

"Qapu Khalqi emergency frequency – this is Graveworm mercenary vessel speaking." – A new voice on the comms appeared: old, rasping, about as merc as it gets. "Miss Sharif owes us 20 credits so don't let her die on me."
They appeared from the opposite flanks each: a yuan yuan and a bashi. Broel spotted an opportunity and nodded to Kira. She got up, spraying spitfire at the second TAG – a heavily modified ramhorn. A lone panzerfaust warhead rushed by, way off target. She noticed a surge of steam gushing from the knee joint.
"They still hadn't fixed his damn leg," – she smirked, ducking back into cover.
The unknown pirate came from the left side, howling like a banshee in the typical yuan yuan fashion. He dashed forward and threw a smoke screen between Scarface and the left flank, keeping his cool and staying just out of range of Rasail's suppression fire.
They hopped over the ledge and down on the ground, Kira taking point with Broel and Bill closely behind. She hugged the crate's corner, peaking out just enough to spot the tohaa. The kaplan counted the shots: he was about to reload...
"Light 'em up!"
Perforated with bullets, the Rasail fell faceup, firing the remaining rounds into the ceiling. The chaska went limp, flamethrower disabled. The second the coast was clear, K1LLY tucked behind console and got to work.
"Blasted thing is encrypted. It's gonna take some time, don't let them near me. Broel! Get your squad to cover, that smoke ain't gonna last."
The bashi bazouk snuck into the right flank, covered by holoechoes. K1LLY overheard her cursing at the krakot. She won't be much of a help if the morat blasts her right at the entry point. SMG and chain rifle shots overlap briefly and then fell quiet.
"Got it! Transmitting the data now-"
"Shit, the gorgos is back!" – Edip yelled on the comms. The TAG walked right into his rockets. Engulfed in fire, it fell apart. The second later, the pilot jumped out of smouldering wreckage, ducking into cover.
"We made a dent! Don't let 'em near the terminals!"

The hulking ramhorn replaced the gorgos on the frontline, spraying its twin Mk12s. The rest of the flashbots shut down peppered with bullets. Engin and Edip's bio-signs flatlined soon after.
"K1LLY, watch it!"
Scarface dashed around the corner, his machete raised high. A shotgun blast hit him in the shoulder, disrupting TAG's balance. The al hawwa slid under Scarface's bulky frame, dodging another strike and firing pistol at the opening. The machete slashed through the air, splitting skirmisher's vest in two.
"I won't last much longer," – K1LLY breathed heavily.
"Hold still." – Broel moved out, aiming the underslung blitzen.
"What are you-"
"Don't move!"
Twin warheads fired off towards the TAG. Scarface flashed blue, spewing sparks in all directions. After a couple of seconds of mechanized seizure the ramhorn went still, billowing smoke. Enver spotted a window for counterattack.
"The TAGs are disabled! Advance! Double bonus to any mercenaries still alive for eliminating gorgos and ramhorn. K1LLY, you OK?"
"My comms almost got fried, but it's fine. Leila, get over here and help me with Scarface."
They sticked d-charges to the TAG's frame and then detonated it. No cube jaeger to recover the son of a bitch this time. The unknown Yuan Yuan ran into the midfield, lobbed a smoke grenade, and blasted his chain rifle into the wounded gorgos pilot and a krakot. The red-hot shrapnel punctured the TAG pilot, spraying walls with alien blood. The pirate dropped like a bag of bricks under gao-rael's covering fire a second later. 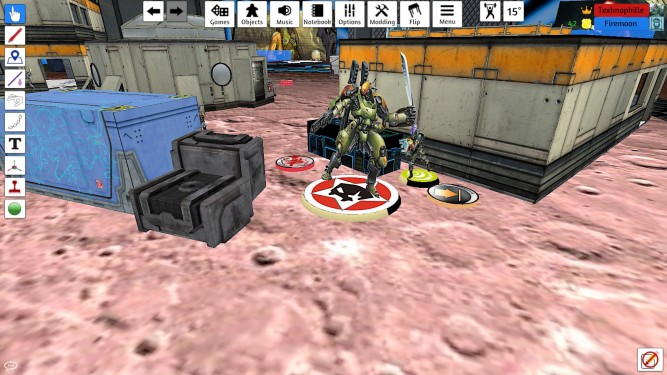 The brave al hawwa fends off Scarface in close combat 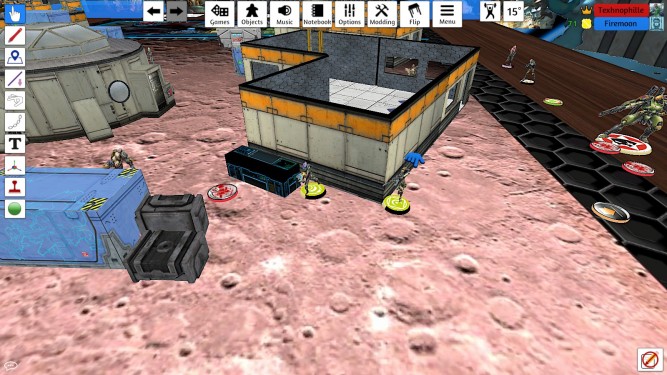 The mercenary TAG is down

The Tohaa started pulling back, with only one krakot dashing towards Broel's fireteam. Leila trained the marksman rifle and breathed out, finger on the trigger. The morat stumbled and fell with half of his head blasted clean off. K1LLY checked his battle scanner and confirmed that the Tohaa forces had retreated from the AO. Enver climbed up the ladder to the roof where the remains of the Funda's team were. Allah, it was nothing but red and corpses. His boots were sticky with blood. Nadia was the only one alive in this mess laying prone, her eyes unblinking and wide with shock.
"Let's collect the data and get out of here," – hafza lieutenant said, pulling Nadia back on her feet. – "The Tohaa presence here is much bigger than we could ever imagine."

1 Person Has Recommended Assault_Unicorn For a Commendation