Jeanne d’Arc showed no mercy against a Tunguska detachment determined to assassinate her. 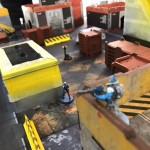 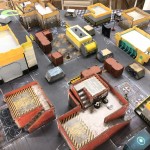 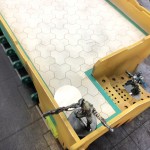 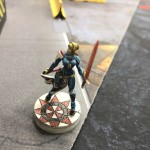 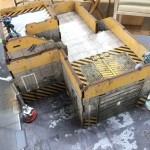 The Tunguska Command Center have received reports of recent PanOceanian activity in the Xaraks Battery Defensive System. A Spektr has informed that Jeanne D'Arc herself was wandering that sector. The Commander AlmostHappy was really interested in analysing her cube, so he prepared meticulously a fella armed squad ready to take her out.

Awkrd the Interventor, didn’t even have time to unpack his belongings from the previous mission when he received orders to lead the hunt against Jeanne D'Arc.
They set a defensive perimeter, making sure that the whole area was cover by Awkrd hacking range and covered by field troops.
After a first strong PanOceanian attack, the Tunguskian forces managed to resist and countered back with strong determination. In the meantime, a Grenzer Squad led by Perseus himself had the only objective of taking Jeanne D'Arc down. They make her retreat to his camp with missiles and cornered her. A heckler chased her down, plant an E/Marat mine behind her, and just in case, he shot her with a boarding shoot gun from just couple of meters. That Tunguska action, was the last report from the Mothership until Awkrd and Perseus arrived to informed about what happened there.

The Armor piercing pellets from the cartridge vanished against Jeanne “The Crazy” ‘s shiny armor. The last thing the poor Heckler saw before receiving a bullet in his brain was the most beautiful face he has seen in his life, smiling and comforting him at his last seconds of life.
From a far, the rest of the Tunguskan forces started to shoot at her in a vane attempt of stopping or at least, slowing her down.
The lucky ones, could enjoyed a view of her face before being erased forever, most of them, they didn’t even saw from where the death was coming.
After a full burst of piercing ammo to her face, Perseus and Awkrd got themselves enough time to fled away and live to fight another day.
Spreading terror into the battlefield it is an effective way to convert people to Catholicism, because surely Perseus and Awkrd are going to question God’s existence after what have they experienced.

No one has recommended AlmostHappy for commendation. Log in to be the first.