Commander, our battalion was ambushed by Qapu Khalqi forces so we had no other option than to fire back. We managed to control one of the Antennas and extract the intel we were looking for, but just S. Montoya and I were able to leave the area alive. 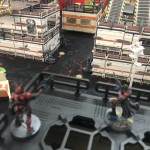 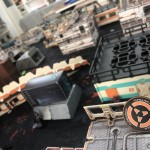 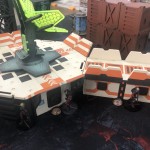 Commander “AlmostHappy” is waiting for his Freshly promoted Lt. Castillo to arrive to report his recent skirmish on Xaraks Artillery. The orders were clear: “Do not engage combat with any enemy army. We just need updates in the Novyy Bangkok Defensive system. Control an Antenna, transmit the required data and get out of the Asteroid.” It was common for AlmostHappy to do not trust any of his Lieutenants until they have proven themselves valid in a few strategic missions. Of course, they did not call him AlmostHappy for his cheerful and supportive behavior.

- Grenzer Purslane: [muttering to himself in his way to report to his Commander] I am fucked. I am damn fucking fucked. Ok, just fucking breathe, you did nothing bad, just following order. Fucking stupid orders.
Commander! [said firmly while saluting], Grenzer Purslane reporting from battle.
- Commander AlmostHappy: At ease, Grenzer. Please, inform me about the events occurred on Novyy Bangkok.
- G. Purslane: Commander, our battalion was ambushed by Qapu Khalqi forces so we had no other option than to fire back. We managed to control one of the Antennas and extract the intel we were looking for, but just S. Montoya and I were able to leave the area alive.
- C.: In a mission where I specified to NOT TO open fire against enemy troops, I have had six casualties. You would understand if I request some more details about the operation itself.
- G.: Of course Commander, excuse me:

On our arrival to the Xarak Batteries, we did not spot any other presence in the sector, so we deployed our troops to control and secure one of the Antennas long enough to acquire all the data needed.
Our hacker hijacked an Aerial Deploy signal and managed to nullify one of the incoming troops, but another one landed behind our lines. He jumped out of a smoke curtain and shot an infernal rain of blazing confetti, taking down our hacker, paramedic and even the Lt. Castillo.
- C.: Do not intend to interrupt your narrative, but how it is possible for a lonely soldier with a Chain Rifle shot to take down three of my men?
- G.: He shot twice Commander.
- C.: I hope you would be able to identify such an outstanding soldier that managed to dodge bullets from a Core Fireteam meanwhile killing three well armed soldiers.
- G.: It was a Yuan Yuan Pirate Commander. [said while looking away from his Commander’s face]
- C.: [Staring to Purslane’s eyes he stated] So, you have been “Yuanised”. [AlmostHappy fixed his look on Purslane during too many seconds, struggling with himself not to laugh nor slap his soldier]
[after a long pause, he continued] Please, I would love to hear the rest of the report.
- G.: Spektr Alma secured one of the Antennas with mines and controlled it long enough to transmit all the data. Unfortunately, they took her down. It was the Ghulam Fatma again Commander. [AlmostHappy did not react at all]
After that, the Hollowmen lead us to confront their army in a face off. They were wounded, but managed to jump on top of a building and unload their weapons over the enemy. They were taken down in the confrontation but not before taking some lifes with them.
S. Montoya and I fall back covering our escape route and securing the data we extracted.
- C.: G. Purslane, I would like you to understand that if we have debriefed a mission specifying NOT TO CONFRONT enemy troops, is because I DO NOT WANT YOU to confront enemy troops.
- G.: Yes, Commander. The instructions were clear, it will not happen again.
- C.: Now, it seems like I have a Lieutenant vacant position. In order for you to fill it up, I want you to fly back to Novvy Bangkok and go through every shitty den looking for Yuan Yuans. I want to make sure that those lazy sell outs will think about it twice before accepting money for attacking our forces.
- G.: At your service Commander!

- Commander AlmostHappy: [opening COMS with his delegate] I want Fatma’s cube in my hands. She has become a legend for Haqqislam and that is not acceptable. Make sure that every Fireteam in our ships is aware of the extra reward they can get for taking her down. [COMS goes off]