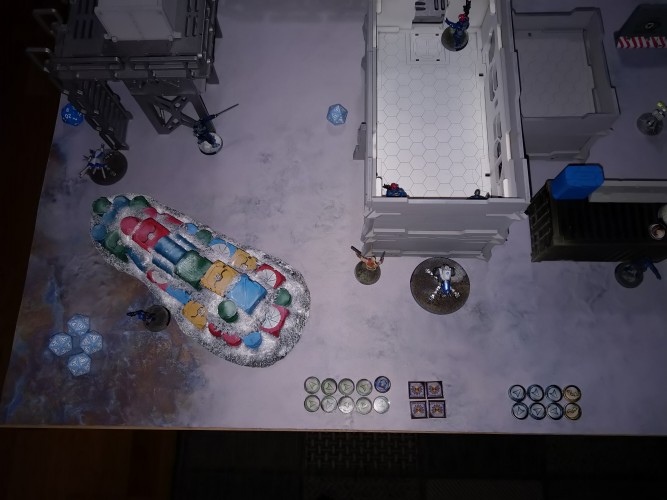 PanOceanian deployment, left flank: Going from left to right, starting with a Fugazi, supported by a Father-Knight lieutenant. A fusilier is covering the rear behind bunch of crates. ABH is proxying for a Monstrucker, next to him is a Mulebot. Inside the whitefloored building are two Bolts, a CoC and Killer Hacker. They are joined by doctor's palbot. At the right edge of picture is a Fusilier hacker. Invisible in the picture, right behind the building (between the building and grey container) is a Trauma-doc. 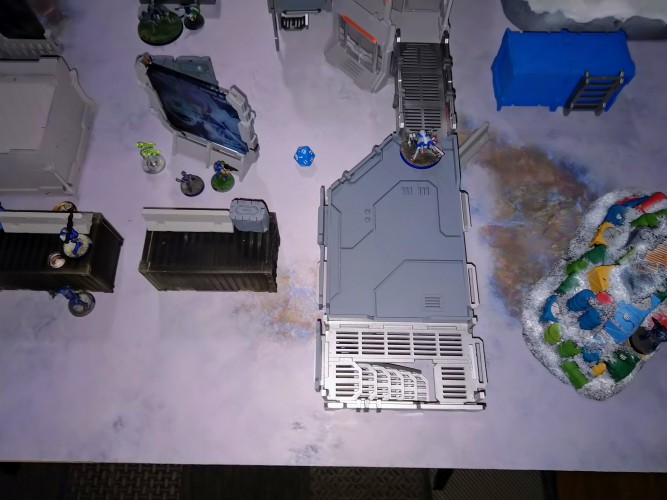 PanOceanian deployment, right flank: On top of the grey container is a Kamau, screening the field with a rocket launcher. Behind him is the fusilier hacker, facing the rear. Behind the billboard is a regular minelayer, who has deployed his mine at the building's corner. The palbot next to him belongs to the Monstrucker. On top of the building on the right is the second Fugazi. At the very edge of the picture, on the right, is another fusilier. Invisible in the picture is the last fusilier, inside the building upon wich the Fugazi is on. He is watching the right rear. 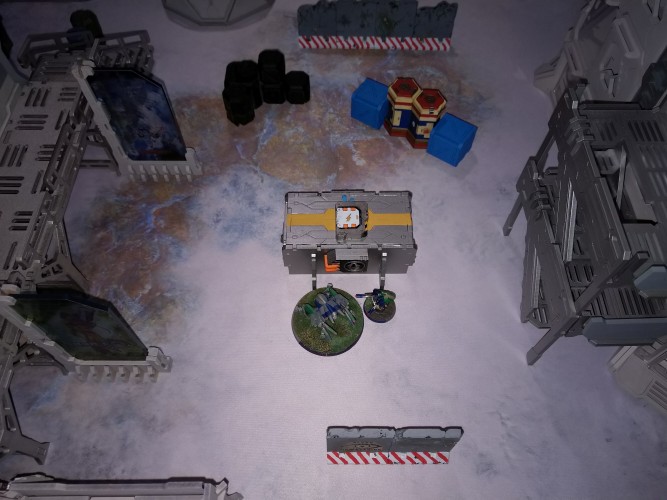 PanOceanian deployment, front and center. A Peacemaker with it's Auxbot secures the center.

PanOceanian push starts with the Peacemaker, making it's way across the center and pivoting towards Yu Jing's left flank where Su-Jian is protected by a Kuang Shi and a Shaolin monk. Fusilier hacker turns on Assisted Fire. A coordinated order of Nisse, Bolt hacker, Father-Knight and Fusilier moves them forward. A Fugazi tries to flash pulse Su-Jian, but the superior remote just blows a hole through the dronbot. Monstrucker moves forth, ordering his palbot to move towards the broken Fugazi. Second order is enough to bring the palbot to fix the Fugazi. Bolt killer hacker moves up the field and goes prone on a walkway to prevent a shot from across the field. (Should have Cybermasked instead, but live and learn...). Peacemaker's Auxbot goes forth and flames away at the two warbanders while Su-Jian get's a free shot. Kuang Shi dodges the flame, but Shaolin goes down. Auxbot is then shot off by Su-Jian. Peacemaker backs away and digs into ARO position. Lastly the Father-Knight goes into suppression in the middle. 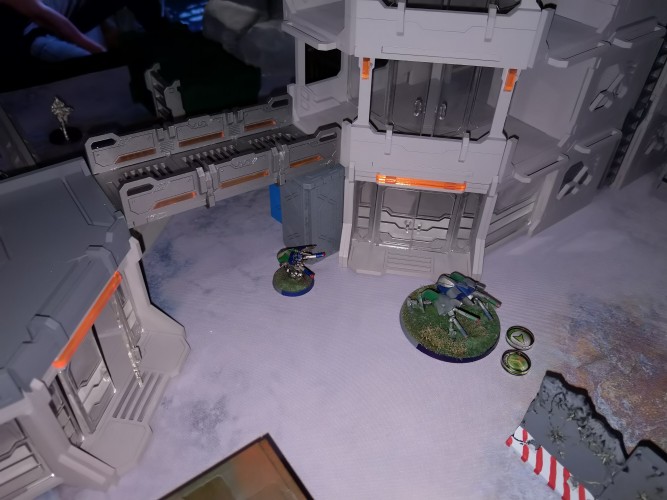 Auxbot going for the two warbanders, with the Peacemaker staying safe. 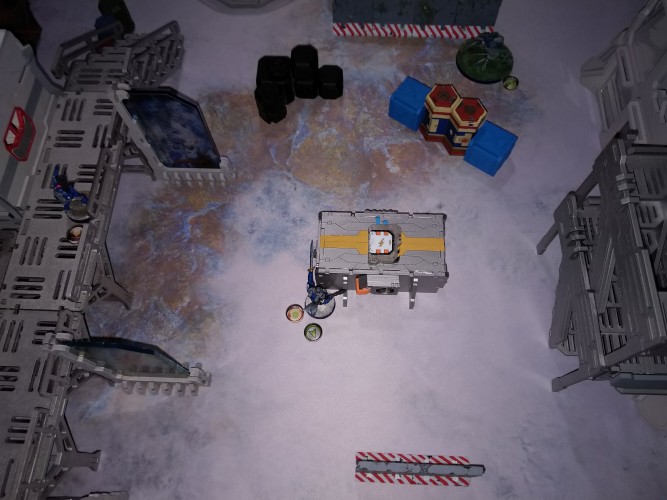 Father-Knight goes into suppression, with the Bolt killer hacker prone to his left on the walkway. Peacemaker is covering up the field, with Enhanced Reaction turned on.

Yu Jing's pack of tricks is opened up by a gaggle of impetuous orders. Smoke lands around here and there. On the Yu Jing left a Kuang Shi challenges the Peacemaker with a chain rifle and manages to break the remote, dying in the process. First really nasty surprise (oh there will another, even bigger...) is a Ninja who comes out of thin air next to Nisse and charges in. Against all odds the Nisse manages to dodge the attack (rolled a crit on Dodge) and a Ninja gets shot in the eye by a Fugazi's flash pulse. So the ninja in now stuck with the sniper, neither doing anything useful. Su-Jian starts to run up the field, taking out the Fugazi again in a exchange of fire. As it makes it's way up to the roof it comes into the sight of the Kamau, who puts a critical rocket right on the robot. After a unlucky armor saves the robot goes prone, having lost two wound and forced to go NWI. Kuang Shi throws down smoke and proceeds to shoot at the Bolt hacker (smoke prevented Father-Knight from suppressing him.) 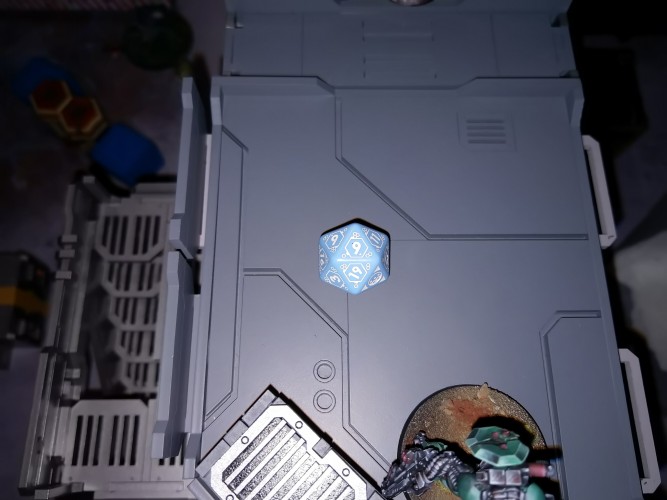 Tough luck Susan, a rocket can ruin your day. 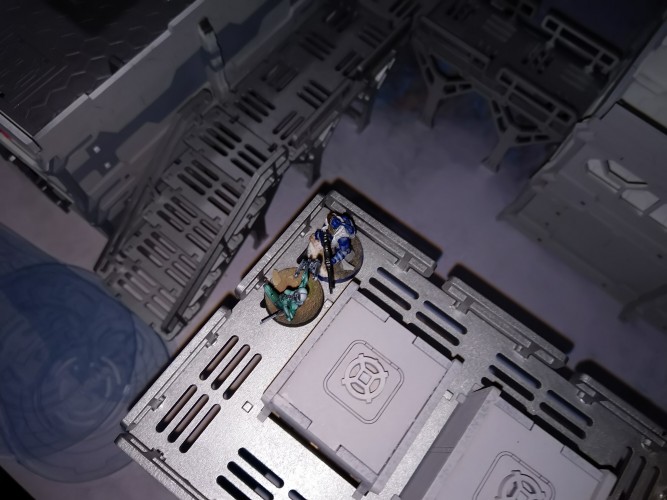 Ninja materializes from thin air and is on the Nisse in a instant. A miracle save is only thing that keeps the sniper in play.

Trauma-Doc moves his palbot to bring back the Bolt hacker. On the PanO right a fusilier goes into suppression to keep Su-Jian in a tough spot. On the center the Father-Knight moves ahead and BOOM! (This is the second surprise, one that changed my game totally from trying to win to prevent a loss). A Hac Tao appears out of nowhere and fires a missile that demolishes the knight in an instant. Not only is my DataTracker gone, so is the best unit to approach and claim the beacon. Good thing that I had Chain of Command to take over command. Bolt hacker moves, knowing that the Hac Tao will kill him with an ARO. He manages to hack the Ninja into oblivion before being consumed by the missile explosion that also claims the palbot. With the Nisse now free he moves to take a shot at the Hac Tao, but only scores a single wound and he goes prone preventing further shots. (Thinking later I might have been able to bring my remaining Fugazi close enough to the Hac Tao to get repeater on it, but didn't figure it at the time). 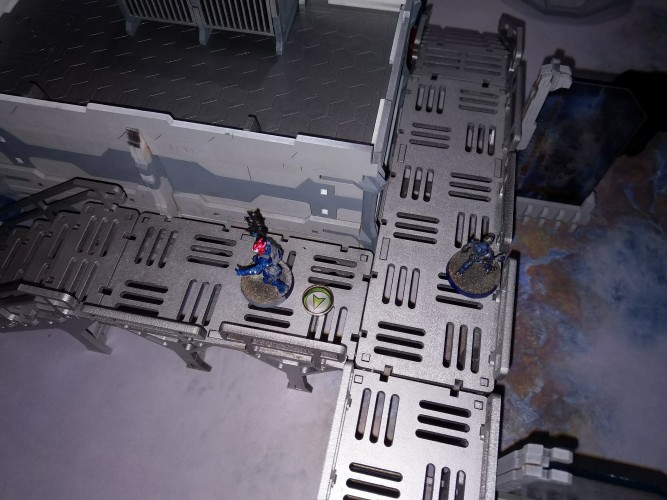 Bolt hacker moves to slay the Ninja, a certain suicide because of the Hac Tao. 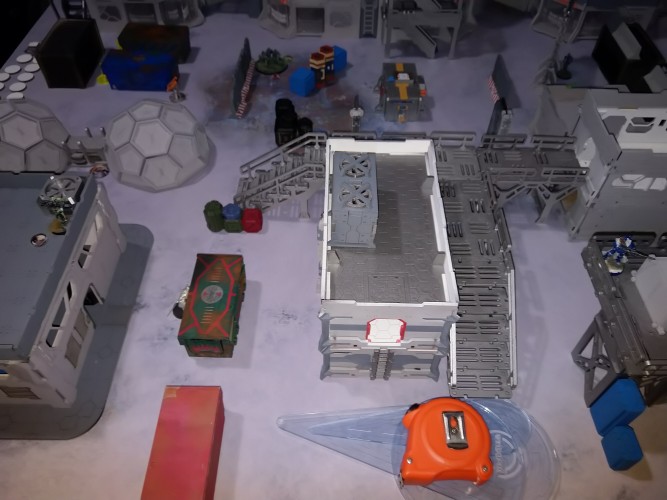 Nisse shoots at the Hac Tao.

Yu Jing pushes again, with Kuang Shi putting down smoke on the walkway. Next order he comes into Chain Rifle range and takes out the Nisse sniper. He dies in the process. Rest of the pack moves into place for the last big push. 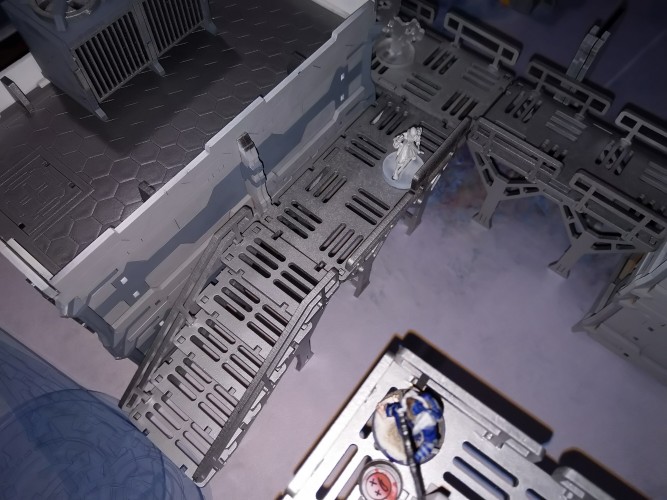 Kuang Shi or Shaolin, can't remember which, takes out the Nisse with a Chain Rifle.

So it comes down to this: Yu Jing has the final say with the last active round. I have no way to get the beacon, so I chose to make my beacon as difficult as possible to approach. Putting down a mine, crisscrossing suppression fire lines, bringing all guns to bear. Even with all my remaining firepower brought to bear the Rui Shi makes a valiant run for the goal. Blowing away all my troops, one by one, the Rui Shi (supported with Assisted Fire) moves across the field. But orders are running low. At last it makes it to the beacon, only to trigger the mine that had been there since deployment. With the Rui Shi a smoldering ruin neither claims the beacon. 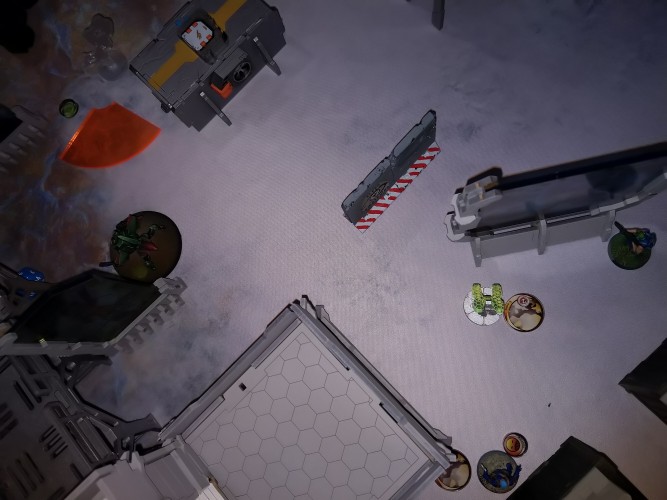 It keeps coming. Rui Shi plows through all fire and fury, under smoke cover. 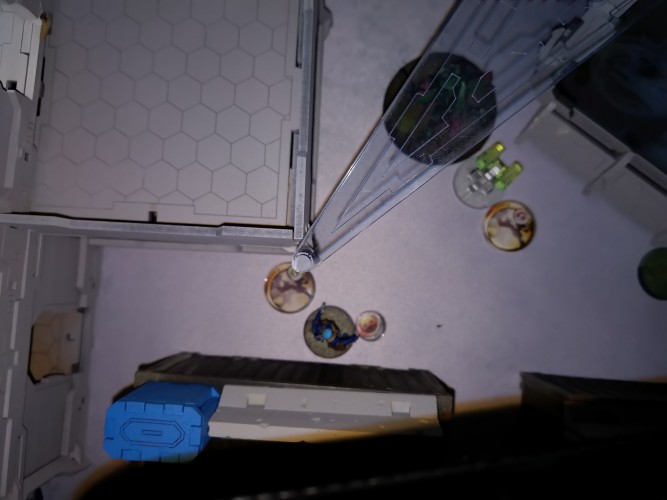 One mine too far. After surviving all the fire the remote finally breaks down from a mine explosion, right next to the beacon. 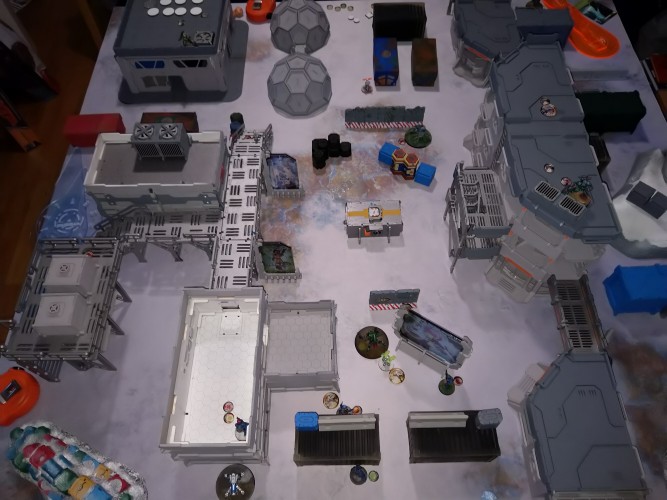 Final scene. I think only my Mulebot was beeping at the end of this rumble.